AND SECOND IN T3 AT PUNISHING RALLY OF MOROCCO

AGADIR (MOROCCO): The South Racing Can-Am Team emerged from a challenging 22nd Rally of Morocco with first, third and fourth overall in the FIA T4 category and second and fourth places in the T3 section and after round three of the new FIA World Rally-Raid Championship (W2RC).

Chilean driver Francisco ‘Chaleco’ Lopez teamed up with Oriol Mena in a bid to defend a 25-point lead over Cristina Gutierrez in the title race. He managed to beat the Spaniard and strengthen his position, although outright victory fell to American rival Seth Quintero. Lopez now takes an unofficial 28-point lead into the final round.

Early technical issues cost FIA T4 front-runners, Austin Jones and Marek Goczal, any chance of challenging for victory in Morocco. That opened the door for Lithuanian team-mate Rokas Baciuška to challenge for honours and he hit the front in the points’ standings after winning the category and finishing ninth of the registered W2RC drivers with Spanish navigator Oriol Vidal.

Behind Lopez, in T3, the Chilean duo of Hernan Garces and Juan-Pablo Latrach were the best of the South Racing Can-Am crews in fourth place. Helder Rodrigues made the switch from two-wheels to take part in a Can-Am with fellow Portuguese Gonçalo Reis. He finished 10th in T3.

The Argentine duo of David Zille and Sebastien Cesana were 11th, the Hungarian pairing of Pal Lonyai and Matyas Somfai crossed the line in 13th and the two all-female South Racing crews of Anya van and fellow Dutch lady Lisette Bakker and Germany’s Annett Fischer and Swedish co-driver Annie Seel were 17th and 19th.

Jeremias Ferioli made an impressive debut with the South Racing operation alongside fellow Argentinean Gonzalo Rinaldi and finished third in the T4 section. Chilean Lucas Del Rio teamed up with Bruno Jacomy to finish fourth and Cristiano de Sousa Batista and Pedro Santos were seventh.

Molly Taylor was the second driver in the Can-Am Factory South Racing line-up and registered an eighth-placed finish in T4 with former Rally of Morocco-winning motorcyclist Andrew Short working as her co-driver.

Jones said: “This was the hardest Morocco Rally I have done. It was tough. We came back from the issues we had and had a good last three stages. We stayed positive and kept in moving.”

South Racing Can-Am Team’s Scott Abraham said: “As always, Morocco threw up a lot of challenges and opened up the title race in the T4 category. This will keep a lot of fans on their seats in Andalucia. ‘Chaleco’ consolidated his T3 lead and it was a great result for the team with some impressive debuts from Jeremias Ferioli and Bruno Conti. We are definitely looking forward to seeing the young drivers coming forward in the future. Hernan Garces finished the best of the non-factory pilots and Can-Am, once again, showed it’s the most competitive UTV on the market.

“The team now has a short turnaround time before heading out to Andalucia in a week’s time to hopefully wrap up the T4 and T3 championships.”

First blood in the FIA T3 category fell to Quintero on the opening Qualifying Stage in Agadir that would determine the starting order for the opening selective section of 316.21km between the port city and the southern town of Tan Tan.  Lopez came home in third in his South Racing Can-Am and Rodrigues and Zille were fourth and fifth.

In T4, Baciuška topped the times in his Can-Am XRS Turbo to snatch an early lead from Oliveira. Goczal was third.

Past Morocco rallies featured terrain in the southern region and the Dakar last visited Tan Tan in 2007 before its move to South America in 2009. Goczal continued his excellent form on the first desert stage to set the seventh quickest time of all the FIA runners and top the T4 results from Baciuška (who suffered a navigational delay), Del Rio and Ferioli.

Dakar champion Lopez won the T3 stage for the South Racing Can-Am Team, the Chilean beating Quintero by 46 seconds. Rodrigues was an impressive third and Garces rounded off the top five. Lopez said: “This is my first race in a car in Morocco. Ten years ago, I participated on a motorcycle. The stage was hard, with difficult navigation.”

The second of the desert selective sections ran for 315.13km between Tan Tan and the next bivouac in Laãyoune.  Guillaume de Mevius pipped Lopez and Gutierrez to the T3 stage win, with Garces coming home in fifth. Lopez duly retained an overall advantage over Quintero of just under 10 minutes and Garces was fourth. Fischer was assisted by a rival competitor after slipping into two-wheel drive and losing a lot of time in a series of tricky sand dunes.

In T4, Oliveira snatched the stage win from Pau Navarro, with Ferioli and Taylor in third and fourth places in their South Racing-built Can-Ams. A time loss for Baciuška handed a 1min 17sec category lead to Ferioli.

Baciuška bounced back strongly to win the third 298.53km desert loop stage around Laãyoune, the Lithuanian stopping the clocks 48 seconds ahead of Jones in strong winds and sandstorm-like conditions. Ferioli came home in fourth in T4 and duly handed the initiative back to Baciuska. Taylor moved up to fifth.

In T3, Lopez was beaten on the day by Quintero and Gutierrez and saw his overall lead trimmed to just 47 seconds. Garces retained fourth in the category with the fifth quickest time.

Crews tackled 345.98km on the fourth stage between Laãyoune and Tan Tan. Lopez lost his T3 lead to Quintero and slipped to second place after dropping 13 minutes in the desert. Goczal got the better of Jones and Baciuška in T4, although the Lithuanian increased his category advantage to 12min 55sec over Navarro. Ferioli slipped to third.

The fifth selective section of 289.51km ran between Tan Tan and the finish in Agadir and included a pair of link sections, although it was later shortened by rally officials on safety grounds because of reduced visibility.

De Mevius topped the T3 times for the second time, but second place for Lopez confirmed his runner-up spot in the overall rankings behind Quintero. Goczal, Conti de Oliveira and Jones set the top three stage times in T4, but Baciuška did enough to fend off Navarro and Ferioli to claim the win. 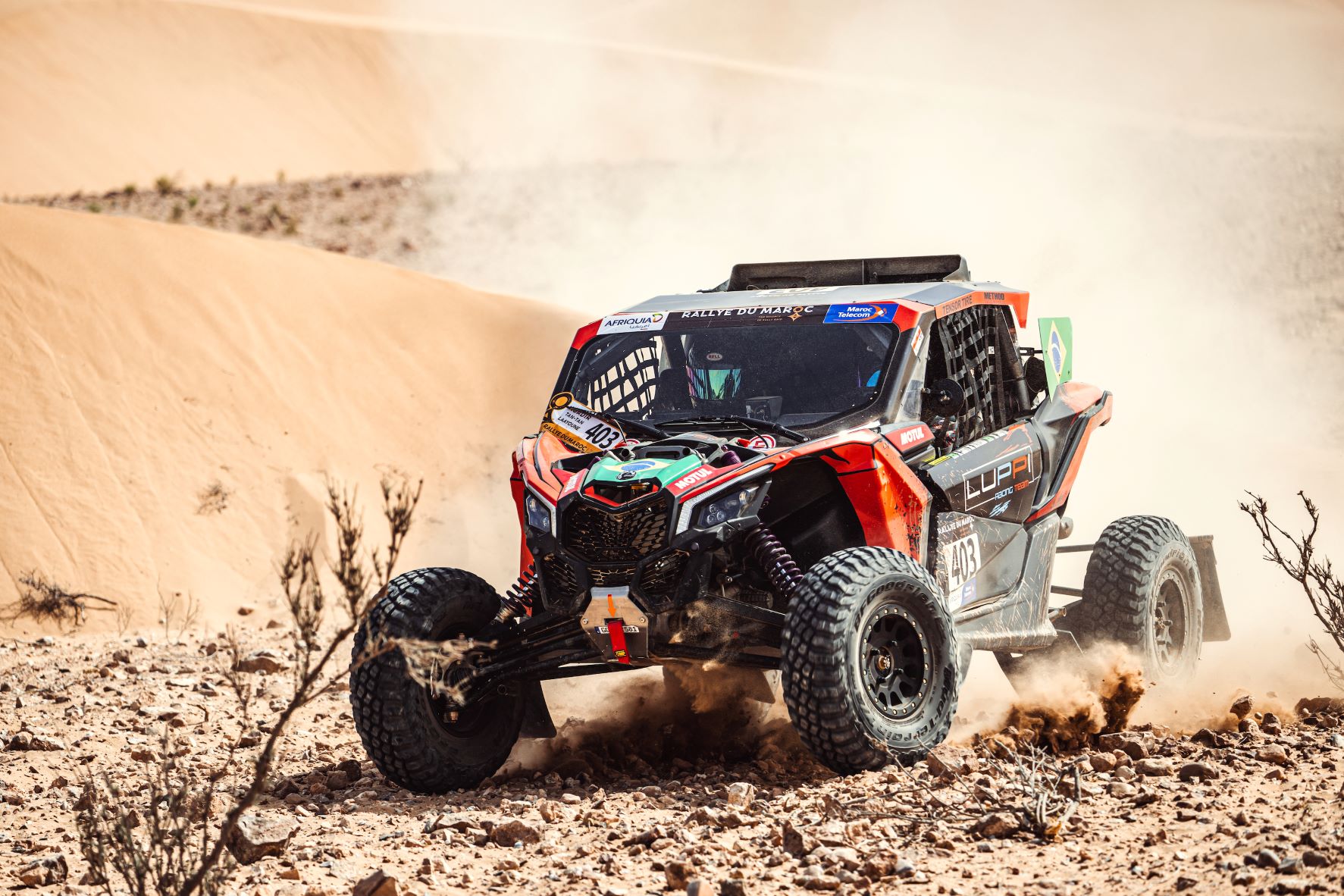 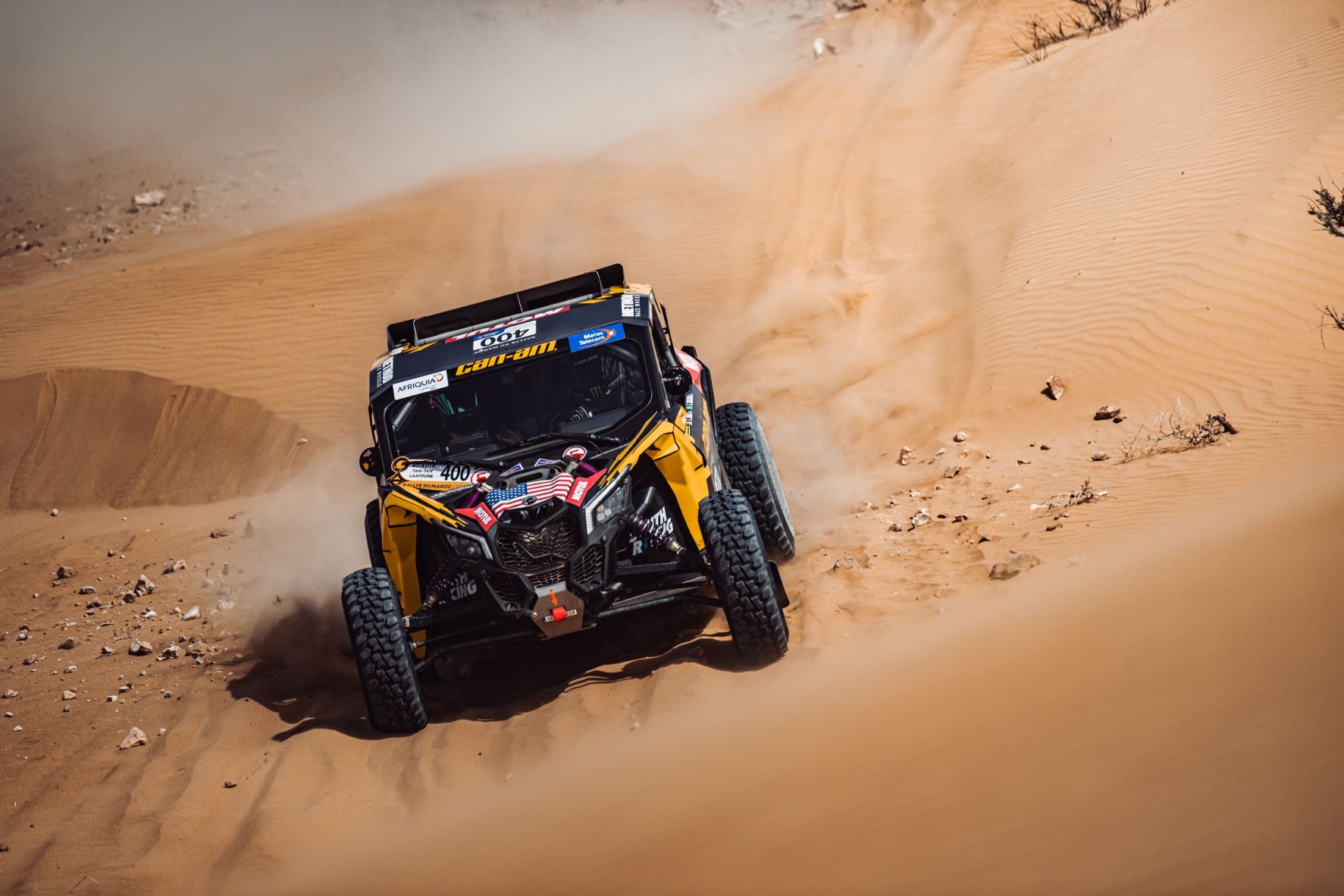 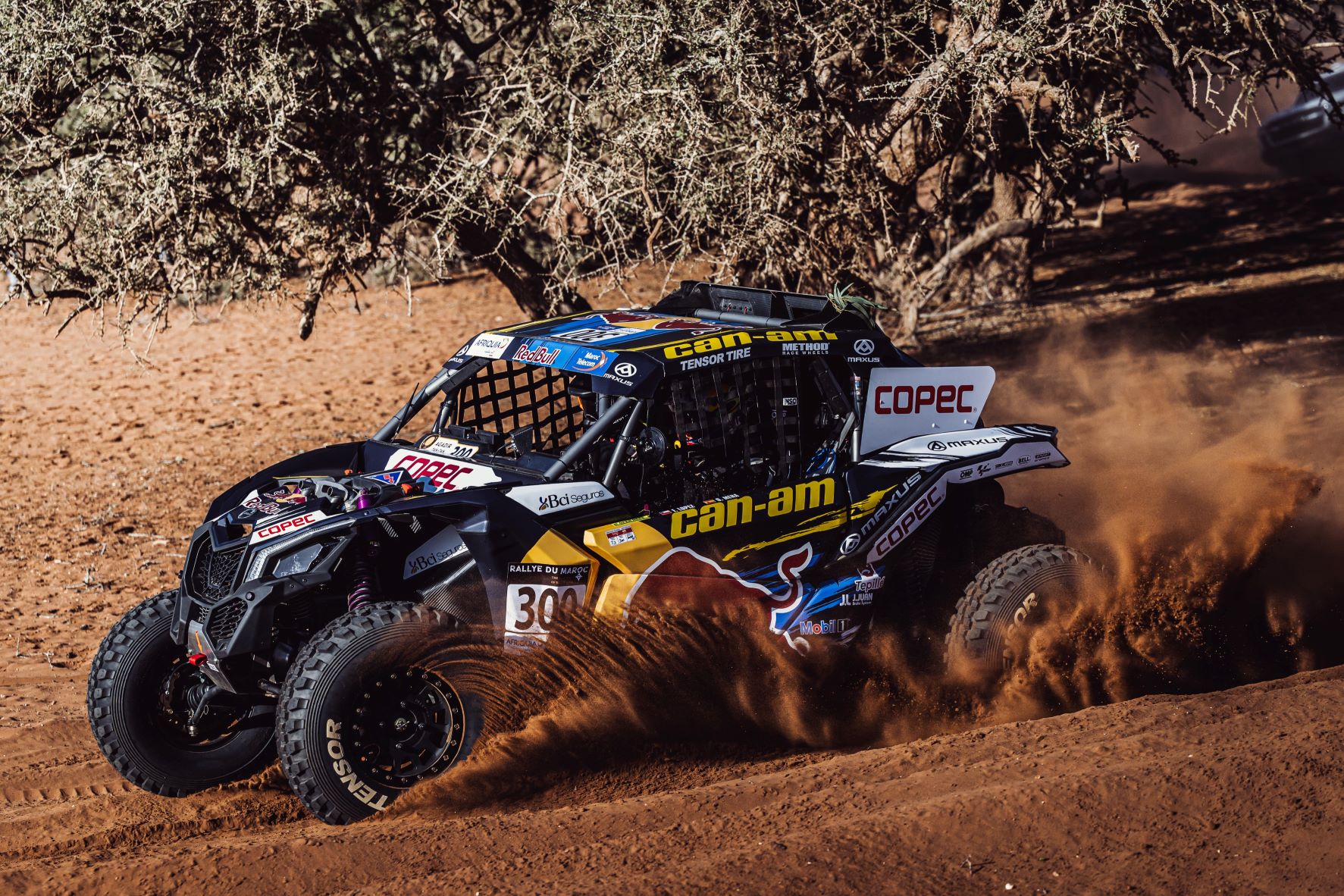 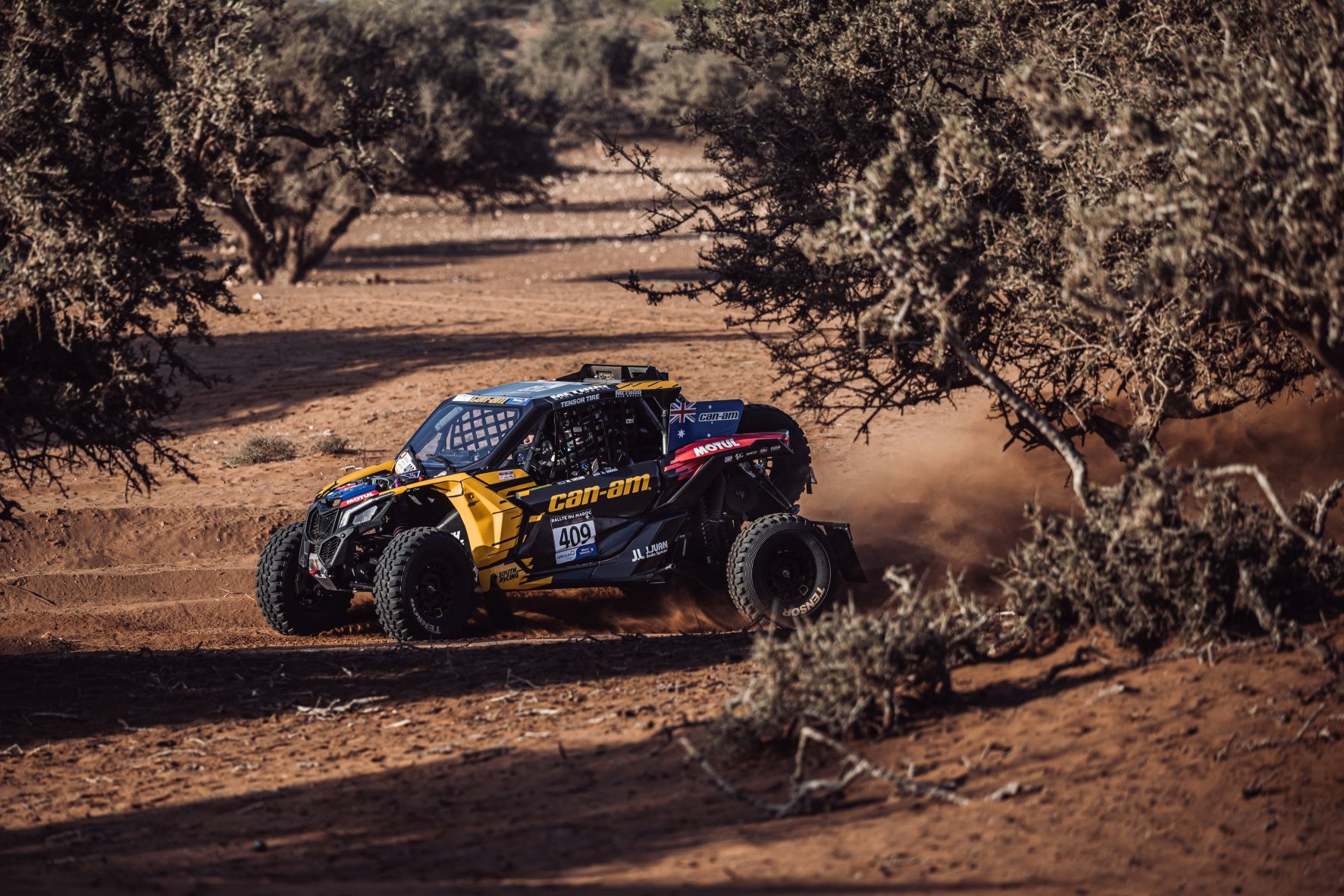 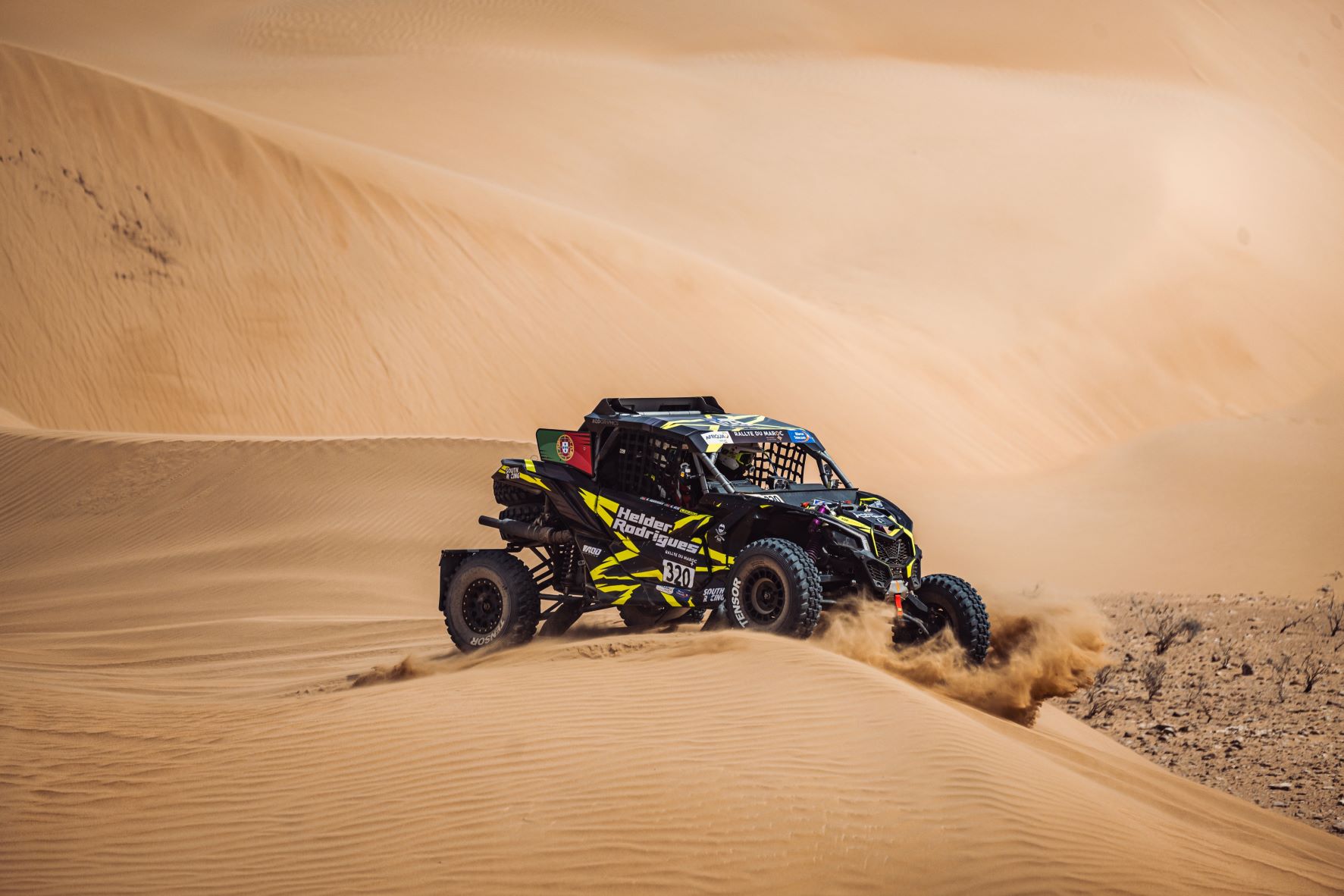 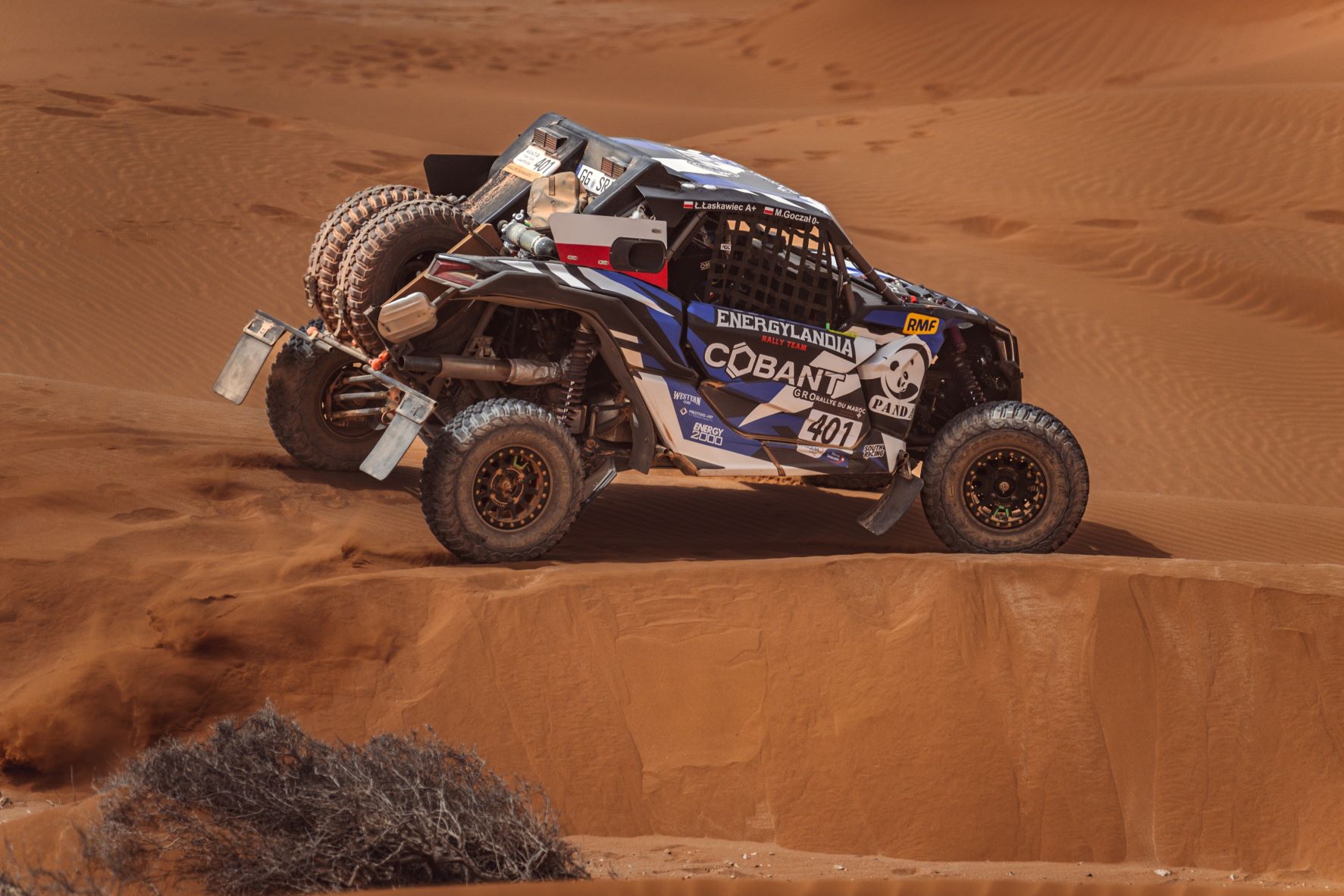 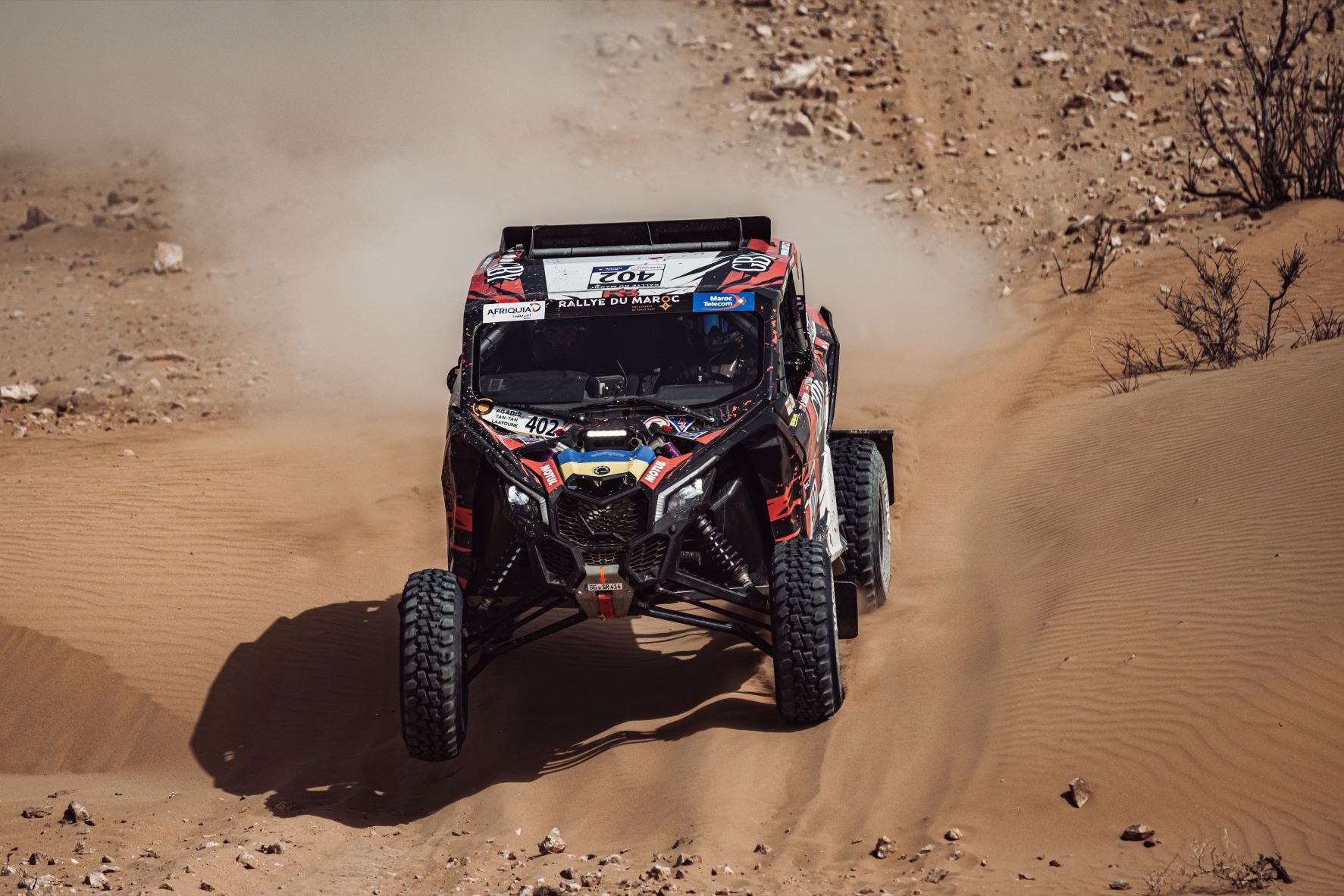